After my 2 weeks working in Taiwan, I figured I’d spend some time in Hong Kong, since the flights there from Taiwan were incredibly cheap!

You can see all the photos here: https://photos.app.goo.gl/6AD7avHvqYtZaxJ88 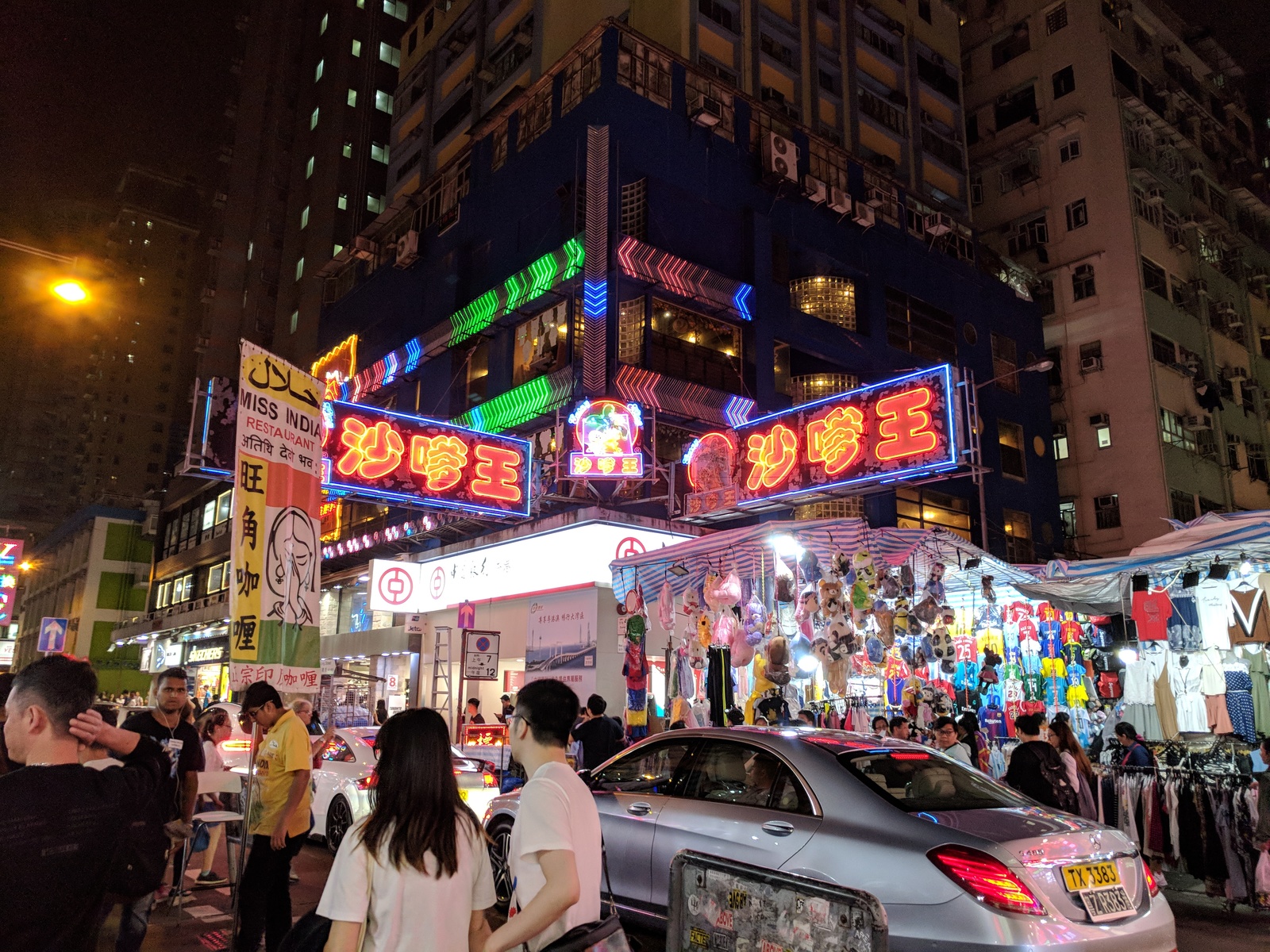 I set out from my hotel in Taipei to Taoyuan International Airport early, and had some time to work on my screenshot tool project while waiting to board.

The flight was mostly uneventful, except my left ear wouldn’t “pop” and stayed like this for the rest of the day :(

I took an Uber to the hotel, and it was a Tesla Model S! I’ve never been in one before, it was so fancy!

After checking in, I spent some time unpacking and relaxing. I decided to head off to Mong Kok, and visit Sino Centre and then Hot Toys Secret Base for my brother, as he’s a huge fan of their figurines. Sino Centre was full of tiny, cramped shops selling a gigantic amount of merchandise, mostly anime figurines. After spending some time there I headed up to the floor Secret Base was on.

This place was incredible. It was basically just a giant display of a lot of their popular figurines. We thought this was also a retail shop for Hot Toys, but it was pre-orders and collections only unfortunately.

After this I headed over to Keyboard Hell, a seller of Mechanical Keyboards located nearby. I was originall going to buy a Happy Hacking Keyboard Pro 2 here, but it was out of stock, and I later came back to buy a Leopold FC660C instead :)

I headed back to the hotel and was pretty hungry, but I didn’t want to go far, so I just bought some Shin Ramyun instant noodles and enjoyed them back in the hotel.

I decided to wander around today, heading west from the hotel. I grabbed some Taro Milk Bubble Tea to enjoy while wandering around, and had lunch in some random Cafe I stumbled across.

After this, I ended up reaching Hong Kong Zoological and Botanical Gardens, a free to enter Zoo/Garden in the middle of Central. The zoo was mostly okay, some of the exhibits were a little small or lacked things for the animals to entertain themselves with, but most were good.

After leaving, I realised the Peak Tram was nearby, so I decided to wait in the hour-long queue and head up :)

The tram up had some beautiful sights, but the Sky Terrace was even more incredible. You could see almost all of Central and Kowloon from up here.

I decided to wait around to try and get a timelapse around sunset so I could see all the lights get turned on, but it was far too crowded.

There was a Bubba Gump Shrimp nearby, and I was starving, so I decided to eat there instead of trying to find food near the hotel.

I overate a little here, but it was worth it :) 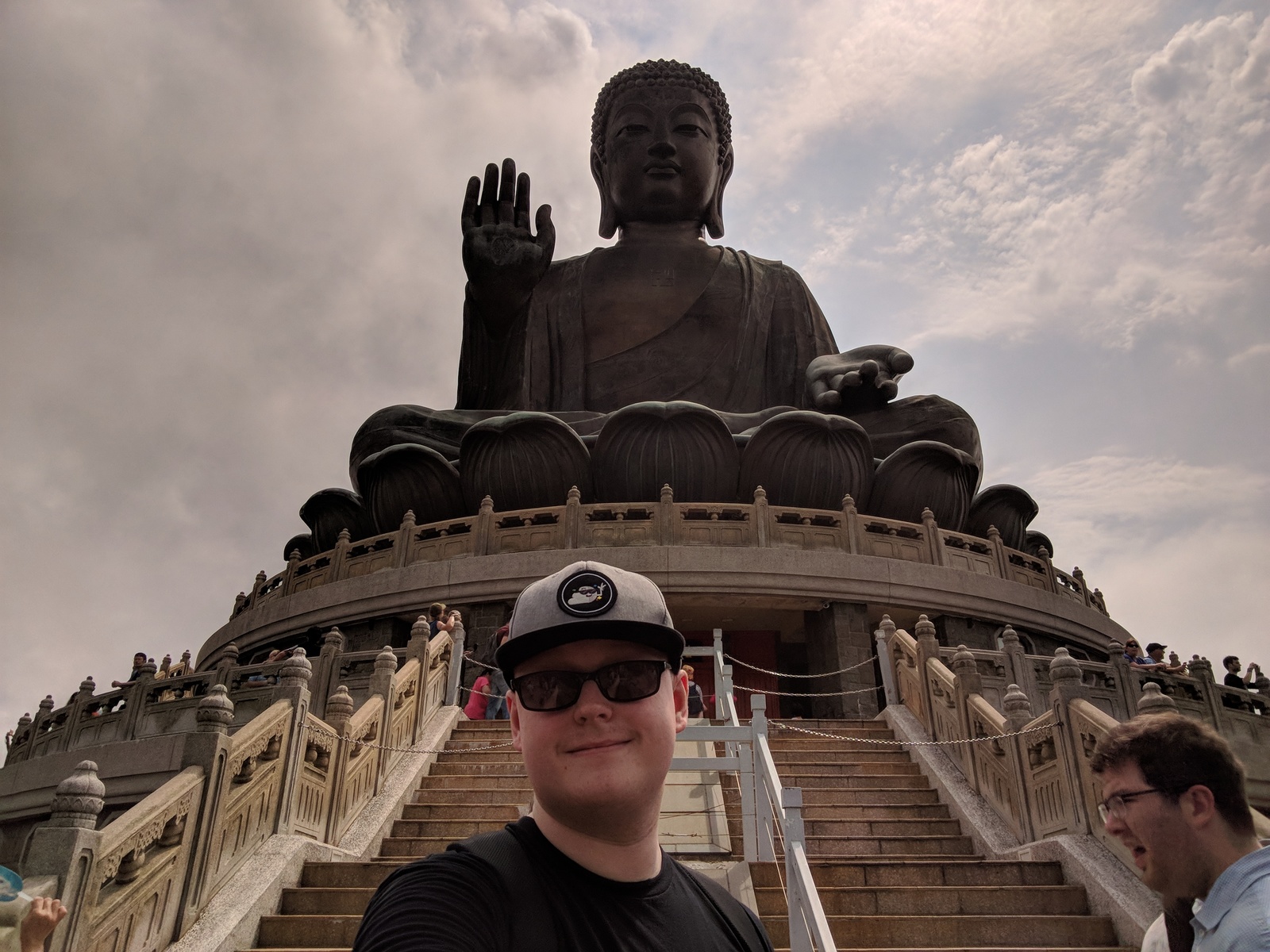 Decided to head to Tian Tan Buddha and Po Lin Monastery today, so I got up early and took the MTR to Tung Chung Station.

Originally I was going to take a bus, but when I saw the Ngong Ping 360 cable car was so close to the station, and how high up it went over the mountain, I decided to take it.

The queue was pretty long, but was worth the wait and entry cost for the incredible views I saw.

After arriving there, I quickly made my way through the tourist trap “village” that surrounded the cable car station and made my way to Tian Tan Buddha. It was up an intimidating staircase, but I made my way to the top anyway!

Afterwards, I headed to Po Lin monastery nearby, which unfortunately I could not get pictures of inside due to their strict policy.

I then took the bus to Tai O fishing village. This is an old village, with many of the houses being on stilts over the waterfront! I spent about an hour here wandering around, before heading back to Sun Kee in Tsim Sha Tsui for some famous Pork Jowls in Noodles and Cheese sauce :)

This looked kinda gross, but was so delicious, my only regret is that I didn’t go back for any more during my trip.

After this I wandered over to In’s Point, another place that sells plenty of anime figurines, where I bought a JoJo’s Bizzare Adenture figurine :) 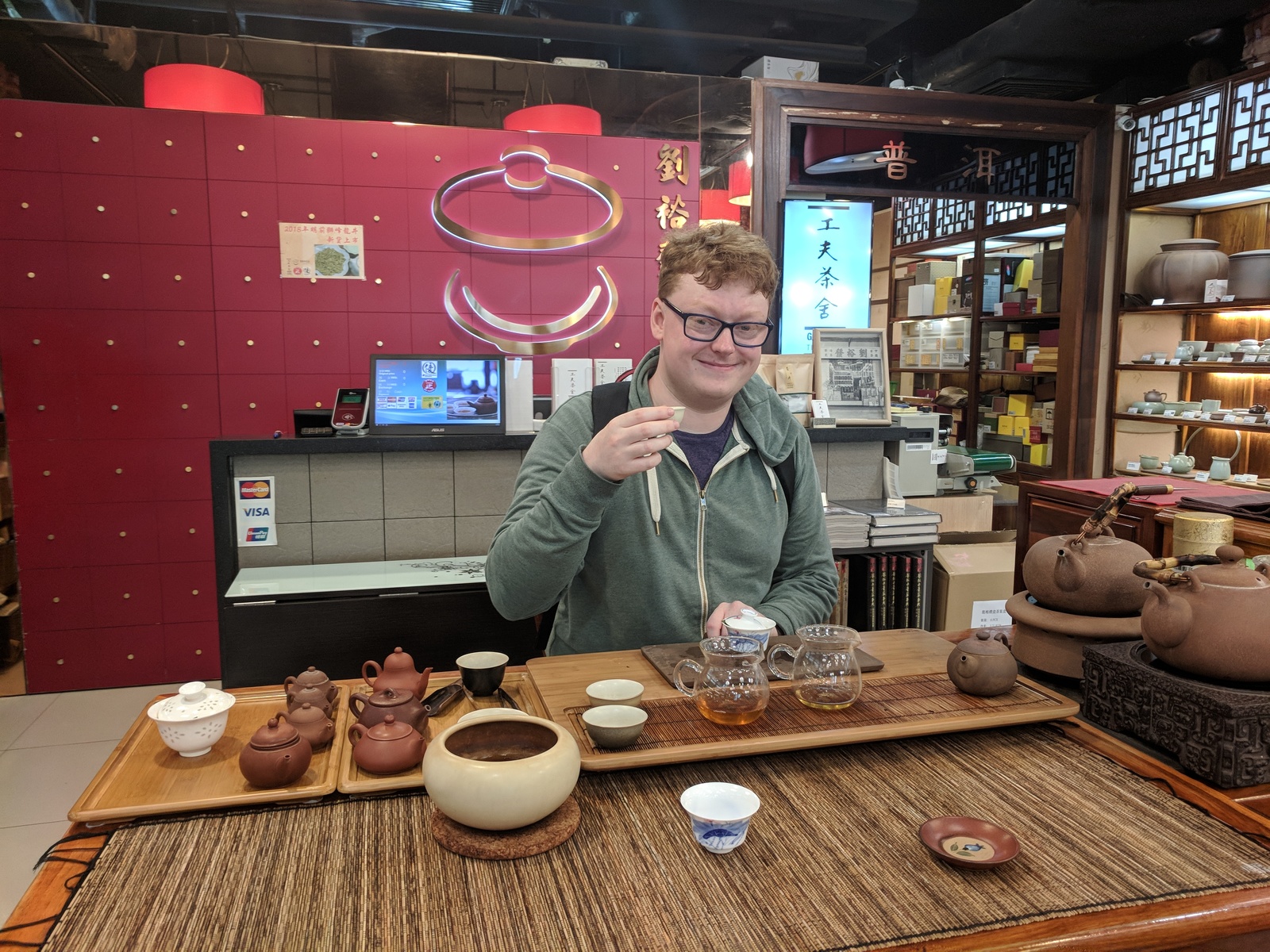 Today I decided to try and get some Dim Sum for lunch. I’ve never had it before and it looked awesome! So I set off to IFC Mall to eat at Tim Ho Wan, which has a Michelin star! It took me a while to find the place as anyone I asked didn’t speak English and Google Maps just showed a picture of outside the mall (it does this for a LOT of places in Hong Kong).

I got to skip the queue because I was alone, and was sandwiched between 2 different families. I ordered Baked Pork Buns, Deep fried pork dumplings, and glutinous rice dumpling and was happy to discover that the tea was free :)

This food was delicious! I especially liked the Pork Buns and will try and find a recipe to recreate these at home, but the glutinous rice dumpling really surprised me. I honestly thought it was going to be a dessert, but I ate it anyway. It was basically steamed meats and mushrooms with glutinous rice, simple and delicious!

I then set out to pick up some Pu-erh tea for my boyfriend, as well as some Oolong for myself. I read online for good places and settled on Lau Yu Fat Tea Shop in Lok Fu Place.

This place was incredible! I had a couple infusions of a raw pu-erh I was thinking of buying, and when I realised the costs of the rest of them, I settled on it, as it was the cheapest in the shop, delicious, and exactly the type I was looking for :)

I then looked for some Oolong and chose one that smelled to my liking before tasting some infusions again. The first cup tasted like dandelions, I loved it! It then started to mellow out and develop other tastes that I am too inexperienced to describe.

After this, I went back to Mong Kok and trawled through Ladies Market, picking up some silicone laces that my mam wanted. I grabbed some more Steamed Pork Buns as I was starving, and ate them while waiting for Keyboard Hell to open.

In Keyboard Hell, I bought the Leopold FC660C, and had a great chat with the owner for about 30 minutes about Topre switches, and Realforce and Topre’s attitude toward the community that want Topre switches. It was a great chat despite the language barrier, and he even gave me a metal keycap of his shop’s logo :) 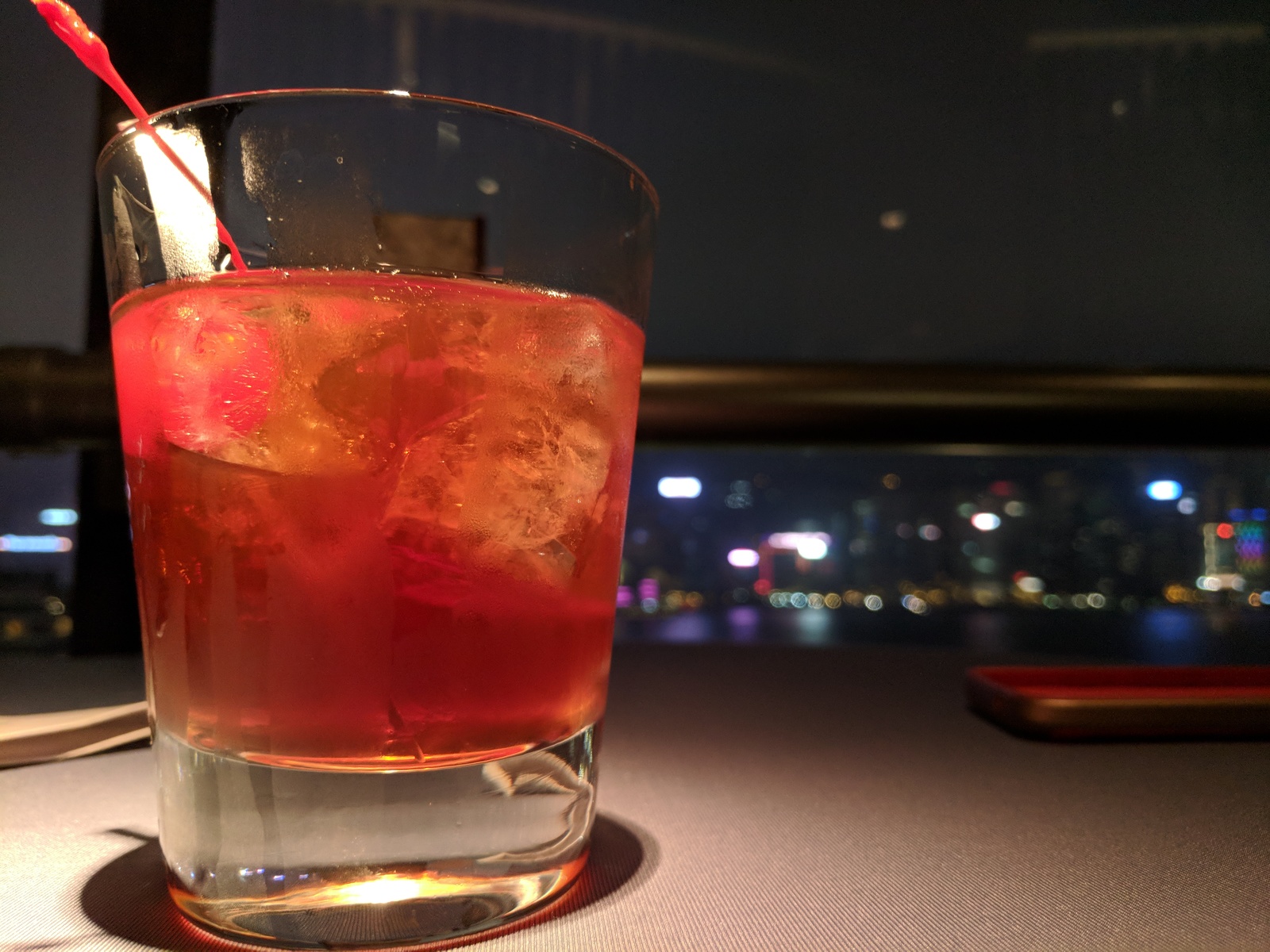 No idea what to do, wandered, flagstaff tea museum! I had no idea what to do today, so I wandered over towards Hong Kong Park! Here I visited the Flagstaff House Museum of Tea Ware. This place was incredible! It was a journey through the history of tea ware, and talked about how the methods and tea ware evolved and the influence European traders had on tea ware.

After this, I wandered through Mong Kok again, picking up more goodies for family and friends, before I headed to the Hong Kong Cultural Centre waterfront to see the light show!

The light show was honestly quite overhyped, but still enjoyable. Afterwards I decided I wanted to enjoy some alcohol, so I headed to the Sky Lounge in the nearby Sheraton hotel, and enjoyed a Manhattan and one of their own creations, the Peak Tower. This was Bourbon, Caramel, Chocolate Bitters, and Orange Peel :3 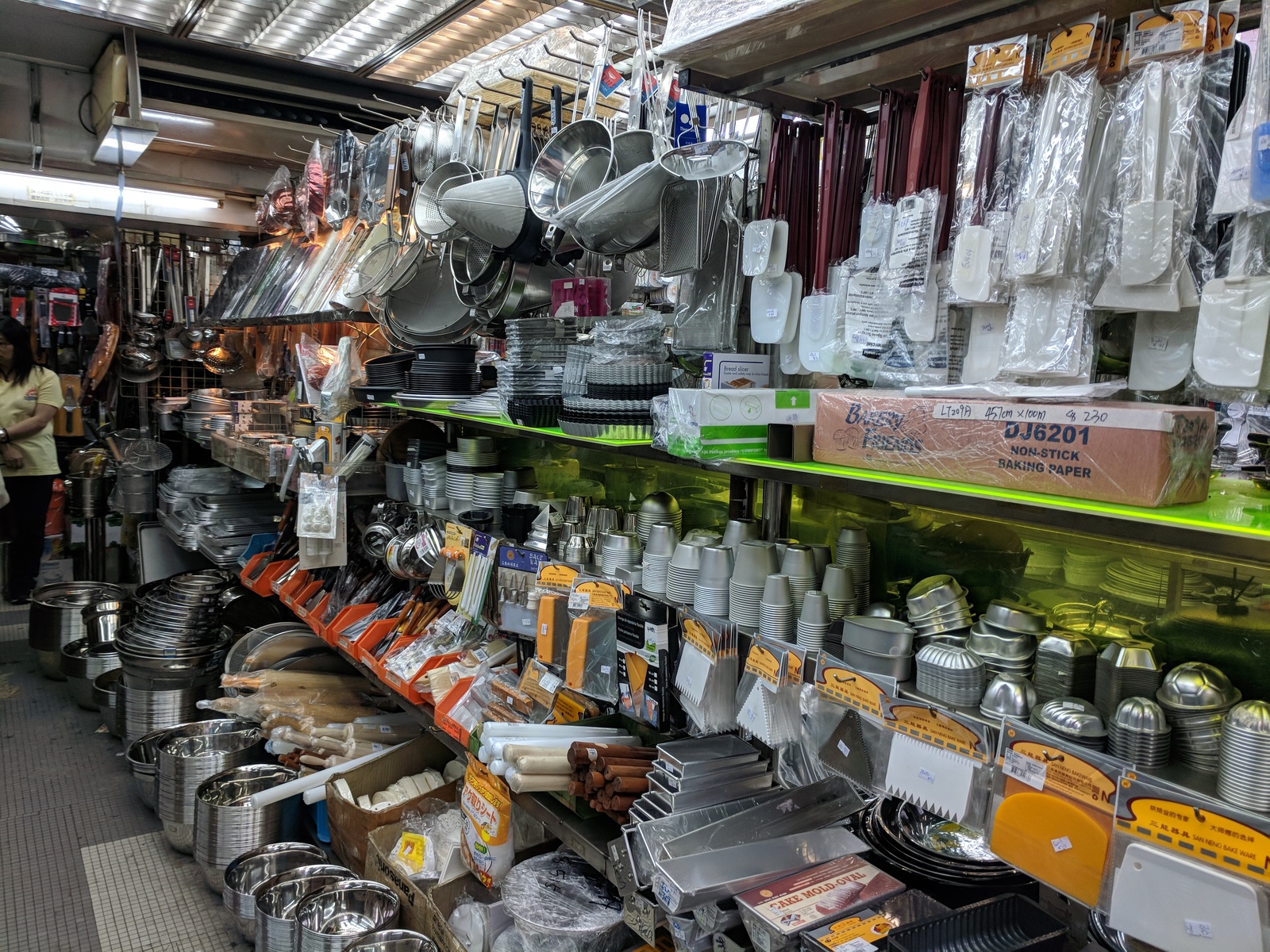 Final day! No idea what to do, so I headed off to Shing Heung Yuen for some tomato noodles. I was choosing between this place and Kau Kee Beef Brisket across the road, but the negative reputation for the service staff there (and the delicious smell of tomato) made me choose Shing Heung Yuen instead :)

I went for “Tomato, Pork Chop, Sausage, And Egg” on instant noodles, along with a Pork Chop “Crispy Bun”. These were both incredibly delicious, if I’m back in Hong Kong again, I’ll be going back to here, Sun Kee, and Tim Ho Wan.

After this, I wandered up towards Shanghai Street to look at all the kitchenware, and maybe buy a cleaver!

This street was incredible, packed full of shops selling everything from knives, to novelty serving stuff (like mini cast-iron pans or tiny deep frying baskets), to intricate silicone moulds.

I ended up buying a #2 Cleaver in Chan Chi Kee cutlery, this is a fully metal, super heavy cleaver, I’ve always wanted one, and now I have one!

After this, I headed back to the hotel to pack, as I had to fly back home in the morning :3 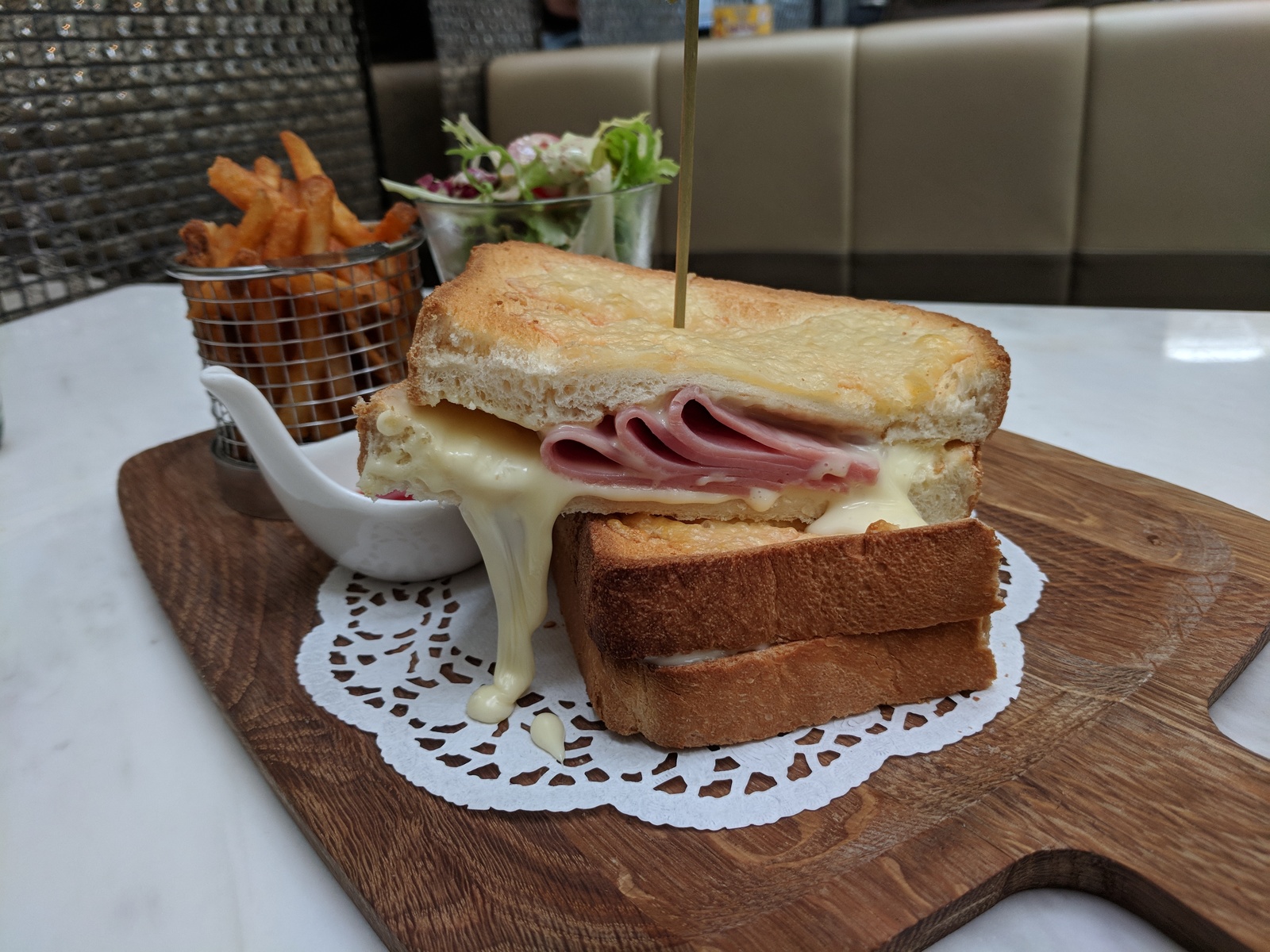 Flight back to Dublin! This was mostly uneventful, so I won’t write much here. I had a great time and if I’m ever back, I’m definitely getting more baked pork buns and cheese noodles :3